Following the Vegan Chocolate Soufflé recipe which was a small breakthrough for me, I decided to take advantage of the momentum and try to upgrade the recipe, in order to get even better results for our vegan Soufflé. What I wanted to achieve is a more stable structure that is a bit more durable than the previous recipe. I also wanted to get a texture that is closer to a texture of pudding on the inside,  rather than of a dense cake on the outer layer, and chocolatey on the inside, which that I achieved with my last Vegan Chocolate Soufflé recipe. 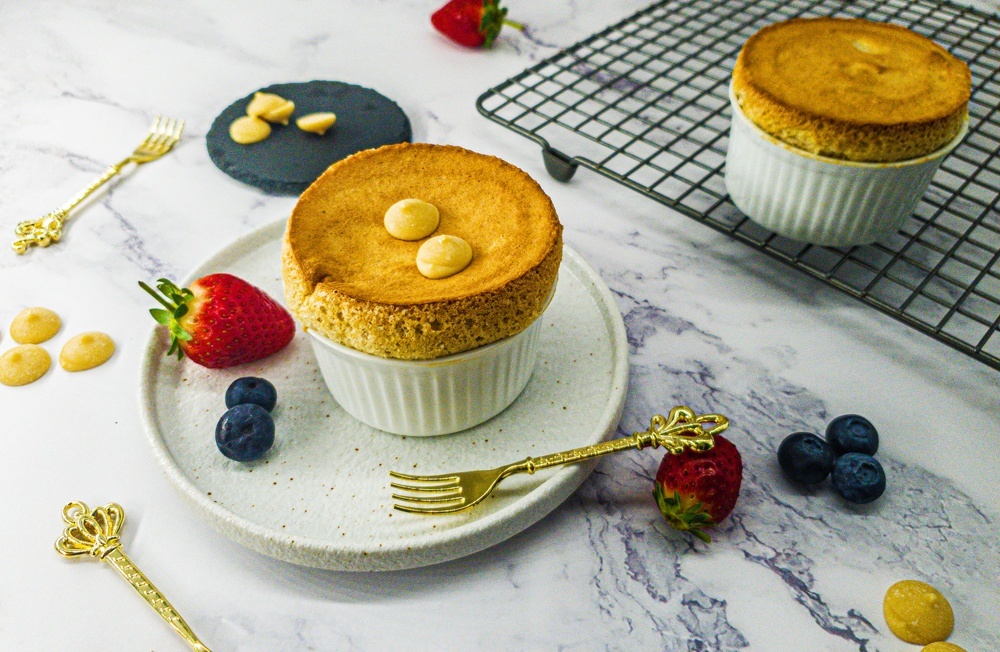 When you add an egg yolk to the béchamel flavor base in the classic soufflé, you get a texture of a fluffy, rich, and jiggly custard. That’s what I aimed for in the vegan version. I was trying to think what else is missing in the vegan yolk replacer powder in this recipe? If you look at the ingredients of the vegan yolk replacer below, their main function is thickening and binding. I came to the conclusion that egg yolk also has a certain percentage of protein that binds all the other elements to this unique fluffy texture of the soufflé. 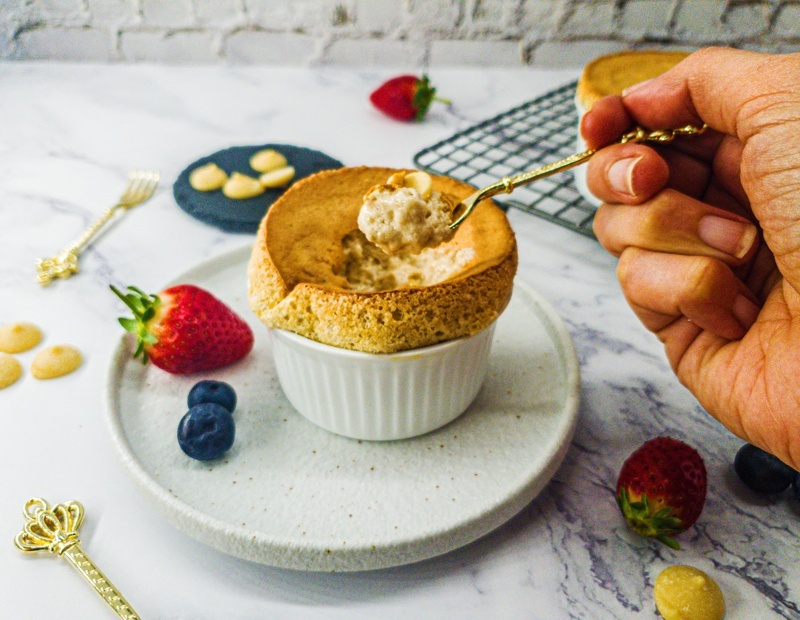 I was reminded that a few months ago I bought a product called Pea Protein Powder.  Initially, I wanted to use it as a binding agent in a vegan burger recipe but hadn’t had a chance to do it yet. Pea protein powder is quite common in the US as a good source of vegan protein and is also used for a wide variety of vegan shelf products like vegan burgers and other meat substitutes. I also read in vegan recipes forums that pea protein powder is used in vegan cooking mainly for binding and texture. Since I haven’t had much time to experiment with this ingredient yet, I said to myself, what’s the worst that can happen … worse case, to the trash it goes. But I had a good feeling about it. By the way,  If you want to get pea protein powder, you can use my link in Iherb and get a 5% off here: Now Pea protein

Well, I added 1 teaspoon of pea protein powder to the vegan yolk mixture listed in the recipe. Not only did it work, it was perfect. I also got the fluffy consistency I wanted, and it was stable for a bit longer. The texture and taste were very close to the classic soufflé. Hence, basically, the flavor base can be anything you want. As long as the flavor base is concentrated enough and without excess liquids such as water, as it will deflate the desired structure. Additionally, unlike the previous vegan chocolate soufflé recipe, this time I made the meringue, with potato protein. Instead of reduced aquafaba, I used a product called “Vegan Base” by the “Fabbri” brand. It is the same company that manufactures the famous Amarena cherries in syrup. 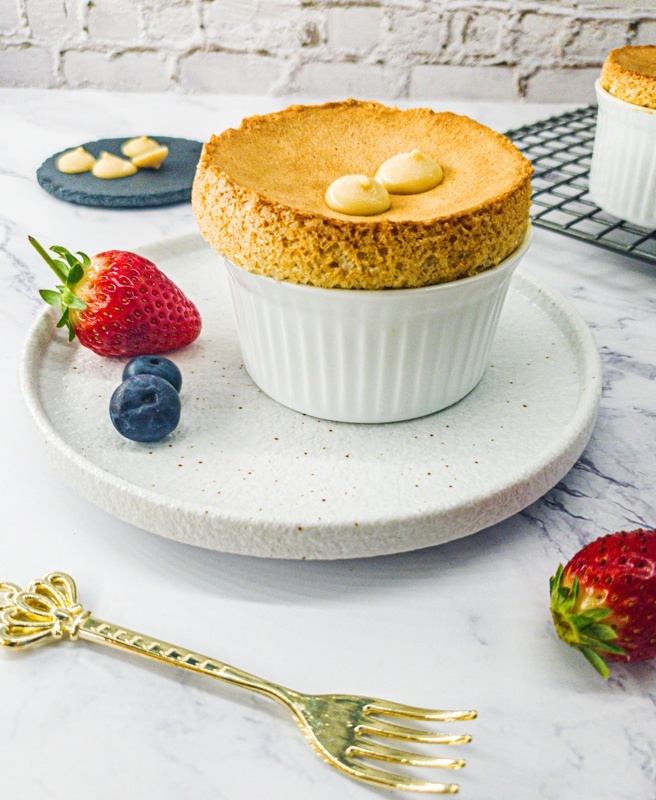 This “Vegan Base” is a protein powder used for baking, made from potato protein isolate, and is a product designed for meringue desserts, and vegan pastries. So far this has been a successful basis for this current vegan soufflé recipe, and also for my  Vegan Canelé De Bordeaux recipe I made several months ago. If you don’t have potato protein powder by Fabbri or any other potato protein brand, you can definitely use reduced aquafaba with the same amount (120 ml) that is in this recipe, and in the same method.

aquafaba from a can

In order to reduce the aquafaba enough to fit the recipe, if it is from canned chickpeas, simply reduce the remaining liquid in the can by 50%.

If you want to make aquafaba, not from a can, you will need to soak the chickpeas in cold water overnighter first. It’s faster to cook the chickpeas in water with a pressure cooker. The recommended amount for this is 1 kg of chickpeas in about 1.5 liters of water. After 1.5h of cooking, strain the aquafaba from the chickpeas and continue to reduce until a gelatinous texture and a relatively darker color are obtained. There should be a fairly large amount of reduced aquafaba left. I usually divide them into bags or containers of between 100-150 ml, freeze and use as necessary.

In any case, these soufflé experiments are still ongoing and of course, I will keep updating. Good luck with this recipe and thanks for reading! 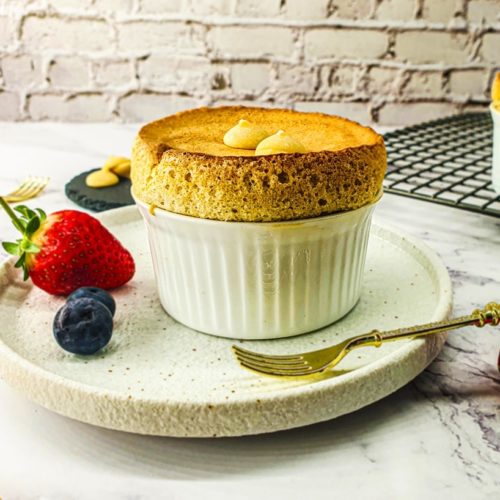 Mix everything well and keep it in a sealed container. Use it for a recipe as an egg yolk substitute.

A Guide To Using An Egg Yolk Replacer 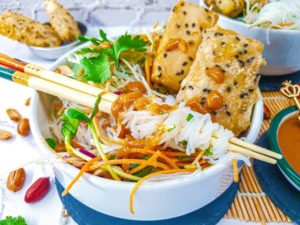