How can we bid the summer farewell without having this easy and delicious summer dessert recipe! And the next pastry is exactly that. This Vegan Peaches Gallete is a little sweet, tangy, crispy, and very light. It’s originally a French pastry made from pie crust dough. I used a mixture of 50% white flour and 50% whole spelt flour to get a more rustic/nutty flavor look to it.

How to make the pie crust dough

The fat ratio has to be high enough for it to get a crispy texture that crumbles in the mouth. We’ll add just about enough liquid in a form of vegan yogurt. That way the pastry won’t fall apart completely before it reaches our mouth lol. I used vegan butter this time. You can of course use margarine or coconut oil. Make sure that for any of these options, vegan butter/coconut oil, must be at a cold temperature and cut into cubes. The goal is to assimilate the fat into the dough without it becoming wet or sticky.

Once obtained a sandy texture from mixing the flours and vegan butter, add a little cold liquid. I chose vegan yogurt because it also replaces the binding role of the egg. You can also use a little ice water instead of yogurt, about 2-3 tablespoons will do the trick. It’s important to knead until combined. At the same time, don’t overwork the dough, otherwise, gluten will be developed, which will prevent the crust from turning crispy. Place the dough in the refrigerator for 30 minutes to rest and allow the butter to cool again.

Feel free to use any fruit you want or even turn it into a savory pastry. Here I chose white peaches and yellow peaches. Remove the peel-off them by scoring X shape at the bottom of each peach. Cook them in boiling water for about 5 minutes and then transfer them to ice water. This method is called “Concassé” and is usually used to peel tomatoes. You don’t have to peel the peaches if you don’t want to.
The vegan sweet cream cheese filling is also very simple to make and contains only 3 ingredients. Choose a vegan cream cheese that you like. I Mixed it with a little vanilla paste and maple syrup. So simple, yet wonderful creamy filling for this pastry.

Once the pie crust has rested in the fridge, we’ll need to roll it out to a thin dough, between 2 baking sheets so that the dough doesn’t tear apart. If you want a nice round galette shape, take a round bowl and place it over the dough to cut the edges into a round shape. Again this step is optional and you can skip it if you want a more rustic-looking gallete. All that is left to do is fill the dough with the vegan cream cheese filling and our rum spiced peaches. Fold the edges over the peaches, and place the gallete in the oven. It’s best served hot with a scoop of vanilla ice cream on top. Just perfect! Enjoy!!
If you made it, tag me on my Instagram page Cacao Shamaness! 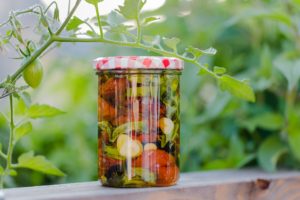 Made With 💜 By Asli Tech